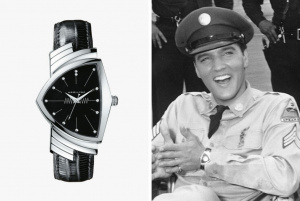 The Hamilton Ventura worn by Elvis Presley on the set of the 1961 film Blue Hawaii was apparently his own watch. It is also notable as the first “electric” watch (as distinct from quartz watches, which would be introduced eight years later), and this reflects The King’s taste for cutting edge design and technology. The brand produces an entire family of Ventura watches today with the funky “shield-shaped” case, and it’s continued its on-screen career most recently featuring in the latest installment of the Men in Black franchise.