The Breitling and Scott Carpenter 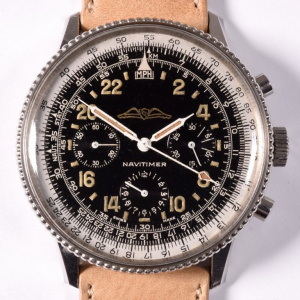 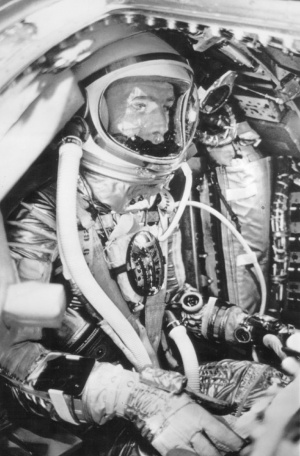 Breitling Cosmonaute, Reference 809, was worn by Mercury astronaut Scott Carpenter. Carpenter flew the Mercury-Atlas 7 flight, on May 24, 1962, becoming the second American to orbit the earth. This Breitling Cosmonaute was the first Swiss wristwatch or chronograph worn in space.

Scott Carpenter was one of the original seven US astronauts, sometimes called the “Mercury Seven”, introduced to the public in April 1959. Carpenter was a US Navy test pilot and it is reported that he was fond of the Breitling Navitimers, a three-register chronograph, designed for pilots, which incorporated a slide rule and other scales and markings useful for navigation. Like most wristwatches, the Navitimer had 12-hour indication, meaning that the hour hand rotates around the dial two times per day. Each of the seven Mercury astronauts had a special responsibility for the development of the Mercury spacecraft and Carpenter was given responsibility for the onboard navigational equipment. (By way of example, Alan Shepard focused on recovery of the astronauts upon landing and egress from the capsule and John Glenn focused on optimizing the cockpit and the flight simulator.)

Scott Carpenter flew the Mercury-Atlas 7 mission on May 24, 1962. Similar to Glenn’s flight, Carpenter completed three orbits of the earth, spending approximately 4 hours and 40 minutes in space. Carpenter landed in the Caribbean, approximately 250 miles from the intended landing point. It took over an hour of frantic searching for U. S. Navy vessels to locate Carpenter, floating in his life raft. Carpenter’s arm was submerged in the water, and his watch suffered severe damage.

The 24-hour version of the Navitimer was developed at the request of NASA Astronaut Scott Carpenter, who wore a modified Navitimer with a 24 hour movement and dial on his Mercury flight in 1962. Carpenter later returned his watch to Breitling for servicing, after having been submerged in seawater during space capsule recovery. Breitling replaced the watch with a new "Cosmonaute" model. The whereabouts of the original which flew into space is unknown. 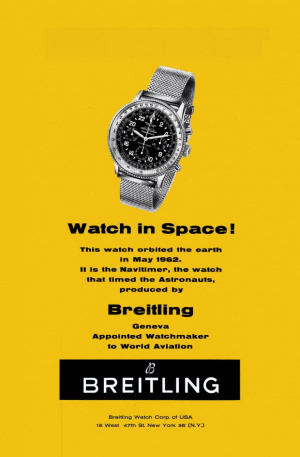