Brief History of the Omega Seamaster 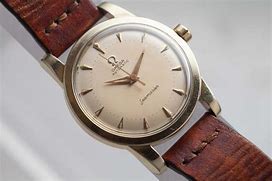 The Seamaster is the longest running product line still produced by Omega. It was introduced in 1948, and was loosely based upon designs made for the British Royal Navy towards the end of World War II. The original Seamaster's key feature was an O-ring gasket used to provide its waterproof seal. This design had been developed for use in submarines during the war, and turned out to also be useful for watches, where it made them much less vulnerable to temperature and pressure changes than earlier (lead or shellac) based gasket designs. The Omega Seamaster first made a diving record in 1955, when diver Gordon McLean reached a depth of 62.5 meters (205 ft) in Australia.

Jumping back a little bit: in 1932, Omega debuted its Marine watch which was worn by the “father of modern diving” Yves Le Prieur, a French navy officer and inventor of the modern scuba mask and tank. Later, in 1936, explorer Charles William Beebe wore the Omega Marine watch while riding in a bathysphere (which was an unpowered sea submersible that was lowered into the ocean via a cable) to a depth of 14 meters off the coast of Bermuda. So by 1948, Omega was a brand well-respected for its robust divers’ watches, and it further bolstered that reputation with the introduction of the Omega Seamaster.

The first Omega Seamaster was modeled after the waterproof wristwatches made for and worn by the British military during World War II. What distinguished the Seamaster from its diving watch predecessors was its O-ring gasket which improved its water-resistance. Previously water-resistant watches relied on lead or shellac gaskets which were easily affected by temperature changes like those a diver would experience at various depths. Omega turned to the submarines used during WWII for inspiration and included a resilient rubber gasket in the Seamaster’s final design. This new case remained intact at depths up to 60 meters and temperature ranges between -40 degrees and 50 degrees Celsius. 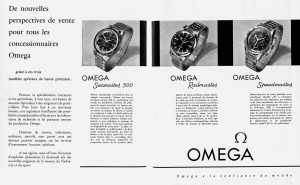 And continuing the tradition of Omega as the go-to watch for divers, famed oceanographer Jacques Cousteau’s team wore Omega Seamaster 300 watches during their 1963 Conshelf II experiments in the Red Sea. Over the span of three increasingly longer dives, Cousteau aimed to prove man could live and work on the sea floor.

Rolex still had the patent for screw-down crowns in 1957 so Omega invented the Naiad crown (Naiad meaning water nymph in Ancient Greek). This crown was mounted on a special spring inside the barrel so as a diver swam deeper, the increased water pressure pushed against the crown to create an ever tightning seal. For long dives at deep depths, this was fantastic but it meant the watch was prone to leakage in shallow waters.

Inside the 39mm stainless steel case was the Omega Caliber 501 which was produced between 1956 and 1960. It beat at 19,800bph/6 beats a second, was fitted with 19 jewels and had a power reserve of 46 hours. The Seamaster 300 Ref. CK2913 was produced with 7 variants, each with its own post-references suffix: Variants 1 and 2 had a back count bezel (The markers reading 50 through to 10 running clockwise), Variants 3 to 6 had a forward count bezel (Markers reading 10 through to 50 clockwise) and Variant 7 had a lollipop seconds hand. Over the years, these bezels were replaced during services so it's very difficult to find watches in original condition with the correct parts for the variant. The design of the Seamaster 300 CK2913 would influence the look of future dive Seamasters, especially the 12-3-6-9 hour markers, coin edge bezel and bracelet design.

Appeared in 1987 and was superceded by the 300M. An integrated bracelet was a feature of these models along with quartz and auto movements. Read more about this model range here