Rado is a Swiss luxury watchmaking company founded in 1917 and headquartered in Lengnau, Switzerland. In 1962 it launched the first scratch-resistant watch, the DiaStar. Today the company produces about half a million watches a year with a staff of about 470 it is part of Swatch Group.

The Schlup & Co. watchmaking factory was founded by the brothers Fritz, Ernst and Werner in 1917. Their humble atelier, a converted part of their parents’ home, was the birthplace of the company that would later become Rado. Though Schlup & Co. got off to a modest start, by the end of World War II the factory was among the largest producers of watch movements in the world.

Schlup & Co. began selling watches under the Rado brand name in the 1950s. The iconic Golden Horse collection made its debut in 1957, the same year that Schlup & Co. celebrated its 40th anniversary. The Green Horse collection followed in 1958 and was one of the first Rado models marketed on its water resistance. By the end of the decade, Rado was a truly international brand with a presence in over 61 countries.

In 1962, Rado continued to set itself apart with one of its most iconic models: the DiaStar 1. Marketed as "the world's first scratchproof watch", the DiaStar 1 was a response to customer demands for comfort, robustness and exclusive style. A prime example of Rado's innovative approach to design and materials, this timepiece brought hardmetal and sapphire crystal into the watchmaking industry at a time when this was far from the norm.

Rado design and material innovations continued apace into the 1970s and 80s. The first gold-coloured DiaStar debuted in 1972, and 1976 marked the introduction of the minimalistic Rado Dia 67, which featured innovative case construction entirely covered by an edge-to-edge metalised sapphire crystal. In 1986 the Rado Integral exploded onto the scene, revolutionizing the watch industry with its use of scratch-resistant high-tech ceramic in the bracelet.

The 90s saw the continued use of high-tech ceramic, now one of Rado’s signature materials. The launch of the Rado Ceramica in 1990 introduced the world to a completely integrated watch case and bracelet made of sapphire crystal and high-tech ceramic. The Rado Sintra, launched in 1993, was the first Rado watch made of cermet, a titanium-based ceramic combined with metal. In 1998 the Ceramica was the first Rado watch chosen to feature pioneering plasma high-tech ceramic, a fascinating colour and material combination that exudes a metallic glow without the use of any metal at all.

Rado ushered in the new millennium with the innovative eSenza, the first Rado watch designed without a crown. The revolutionary Rado V10K was unveiled in 2002; made of high-tech diamond, it is as hard (10,000 Vickers) and resilient as a real diamond. To end the decade in style, Rado honoured its design heritage with the release of the r5.5 collection, a minimalist masterpiece and the brainchild of renowned British designer Jasper Morrison. 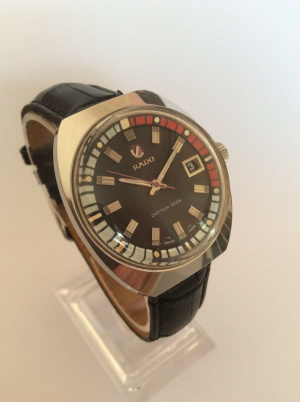