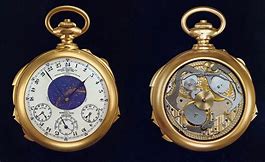 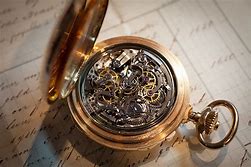 The Patek Philippe Henry Graves Supercomplication is one of the most complicated mechanical pocket watches ever created. The 18-karat gold watch has 24 complications and was assembled by Patek Philippe. It was named after banker Henry Graves Jr who commissioned it out of his desire to outdo the Grande Complication pocketwatch of American automaker James Ward Packard. The two were both at the top of the watch collecting world, regularly commissioning innovative new timepieces.

It took three years to design, and another five years to manufacture the watch, which was delivered to Henry Graves on January 19, 1933. The Supercomplication was the world’s most complicated mechanical timepiece for more than 50 years, with a total of 24 different functions. These included Westminster chimes, a perpetual calendar, sunrise and sunset times, and a celestial map of New York as seen from the Graves's apartment on Fifth Avenue.

Henry Graves spent 60,000 Swiss francs (US$15,000) when he commissioned it in 1925. Adjusting for inflation, the sum is roughly US$202,000, measured in 2014 dollars. The Supercomplication previously held the title of the most expensive watch ever sold at auction, with a final price of 24 million US dollars (23,237,000 CHF) sold in Geneva on November 11, 2014 until the sale of the Patek Philippe Grandmaster Chime at the Only Watch charity auction at Christie's in Geneva in 2019.