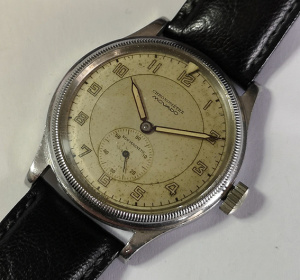 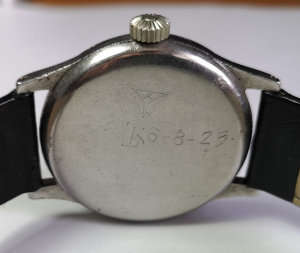 Movado was one of the top watch and travel clock manufacturers in the 20th century until well into the 70's. Producing high quality mechanical single dial and chronograph wristwatches. Among the many companies in part doomed by poor decisions, and ill conceived projects, they finally became a casualty of the quartz revolution, with only a spin off, based on the 'museum' model wristwatch being continued in America, through a separate company trading off the Movado name. Until then they had had a history of producing fine pilot watches, both civilian and issued.

The Movado Ref 12717, is one of the rarest of the Movado steel pilot watches, indeed of all pilot watches, and is believed to have been produced between 1936 and 1938. It is unique in that it is the only Steel pilot watch that shares almost identical physical attributes to the famed IWC MK IX, having a 37,5mm steel case, with inner steel dust cover, and an identical fluted steel rotating bezel (interchangeable with the MK IX), with a large 7mm diameter flat onion crown. Several dial versions are also known to exist, including both a cream and black version with a sector type dial. Currently less than 10 examples have been observed. Due to the lack of a Movado archive, it has been impossible to determine which watch originated first. Pictures show the Movado alongside the IWC for external comparison. Second Movado Pilot watch, with a case back engraving, which looks to have a reference to Junkers, the Aircraft manufacturing company.