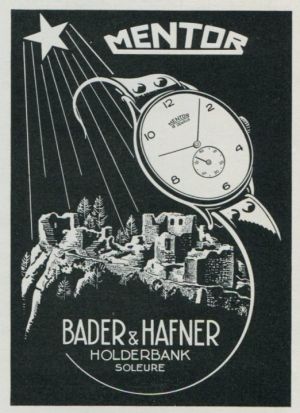 Appears to be a post-War watch company and the "Mentor" name was a tradename filed in 1953 and subsequently registered on 6/1/1954 as a trademark for a company supplying watches, parts of watches, and watch cases. The last holder of the Mentor name was listed as, "Bader & Hafner, Holderbank," but as this takes the use of the name up to 1995, it is not sure when the use of the "Mentor" name on watches was discontinued.

1) The earliest Mentor mark is a simple "MENTOR" on the dial, with the art deco "MENTOR" mark being in use from at least as early as 1947.

2) Bader & Hafner were clearly interested in technical aspects of their products and were responsible for some interesting watch complications in Mentor pieces. Their alarm pocket watch, which seems to have been an early success, was followed by a centrally arranged chronograph hot on the heels of the Mido version. It is not clear how technically skilled the company was from the mid-1950s but there were certainly glimpses of this ability in the later period. The firm produced a relatively high number of alarm wristwatches but, for some reason, chronographs with subdials seem to be absent.

3) Bader & Hafner were not ebauche manufacturers, and the movements found in Mentor watches are not in-house items. Various Swiss movements appear in the watches, including examples from Baumgartner. However, they are apparently not always easy to identify, and ETA calibers are certainly absent from the watches whose movements are stated. The only possible exception to out-sourced calibers might be the original Mentor alarm pocket watch.

4) The span of the market covered by Mentor watches is surprisingly wide. Bader & Hafner were certainly sourcing the lower tier of the watch market from the beginning of the Mentor name, and it is likely that this was then forced to continue when the Swiss watch industry began to suffer from the early 1970s. Nevertheless, there are some very interesting Mentor watches right through the period of production, and Mentor products were by no means always on the cheaper side of good quality. Note should be made of Mentor dive watches, some of which had 25J movements and steel cases .

5) It does seem that even though Bader & Hafner tended to concentrate on watches for the mass market (and there are certainly many survivors), the company had a quite advanced attitude to style. From the early elegant minimalist Mentor time pieces to the comprehensive 1970s range of mechanical watches with digital display, the firm was certainly up to date stylistically, both in their ladies' and gents watches. It is therefore all the more sad that Mentor watches disappeared as a brand, and were gone probably just before the beginning of the 1980s.