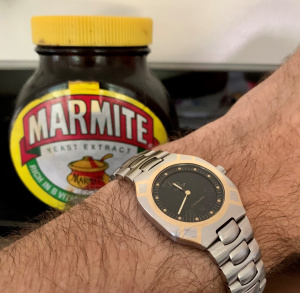 If something is described as marmite, then there's no way you can be indifferent about it or express minor shades of like or dislike. No, if it's marmite, then its very nature forces you to firmly sit in either the 'love it' or 'hate it' camp. Of course among the most obvious candidates for marmite status are artistic creations, things that people are conventionally permitted to have strong feelings about without any fear of recrimination, so that the word regularly crops up in descriptions of music, architecture, theatre or cinema. Correspondingly, though marmite would seem a contentious way of describing a person, it does pop up in descriptions of actors, musicians or other celebrities whose performances provoke strong positive or negative reactions. That said, a brief analysis of web-based evidence suggests that marmite can modify a broad range of other concepts, abstract or concrete – mountains, golf courses, managers, accents, book titles, cars and electronic games are just a few of the things that I've seen described as marmite.

And now it can be used to describe watches too!

Here are some examples of Marmite Watches (feel free to add more!)