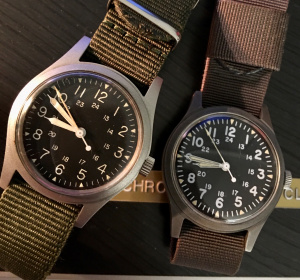 GG-W-113 was a spec released in 1967 and was issued concurrently for many years. The differentiation was that it featured exclusively a 17-jewel, manual-wind and hacking movement and a “sterile” dial for legibility. These watches were meant for issue to pilots and were produced by Benrus, Hamilton, Marathon, and Altus. They produced between 1967 and the late 1980’s, when quartz movements began to gain popularity and start replacing mechanical models. They were utilized most prominently in the Vietnam War, but may also have been deployed in conflicts within the Persian Gulf and other middle eastern theatres.