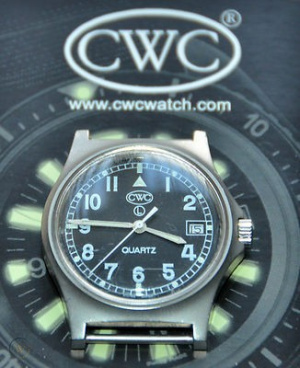 This watch was made for the M.O.D. in year 2K for issue to the RAF - however please note the comments below. CWC have made two or three contracts of this model, the last batch were issued early 2000-2003 with L luminova marking, This was the first watch supplied to the M.O.D. with luminova made by CWC. In most other respects it is the same watch as the army G10 watch with the added feature of the date function.

Watches came with just a C on the case back from this period instead of the expected S/N plus date. A little later still this changed to a C followed by a number, then from 2008 a serial number with year like you would expect on a military issued watch but these are to late to be issued going by CWC's statement and appear to have been sold by Silvermans.