The history of Baume & Mercier began in 1830 when brothers Louis-Victor and Célestin Baume began selling watches in Les Bois, a village in the Swiss Jura. The two brothers forged an enviable reputation for exceptional timepieces incorporating the latest innovations, and the company went from strength to strength. Never straying from its motto to "accept only perfection and always manufacture watches of the highest quality", their business quickly grew.

Keenly aware of the potential represented by new territories, the company set up a Branch in London under the name “Baume Brothers”. This was the beginning of international expansion. It soon expanded throughout the British Empire, spanning India, Africa, Australia, New Zealand, Singapore and Burma. By the late 19th century, the company had already acquired a solid international reputation and was becoming an inescapable watchmaking player abroad.

Louis-Victor was convinced that watches had appeal for women too, and in 1869 gave his daughter, Mélina, a gold pocket watch. Meanwhile, the company was making chronographs and grandes complications, particularly minute repeaters, calendars and tourbillons. Thanks to its time measuring instruments, the company won ten Grand Prix awards and seven gold medals at international exhibitions and shows in Paris, Melbourne, Zurich, Amsterdam, London and Chicago. As well as being beautiful and highly complex, Baume watches also demonstrated a rare degree of precision. They set accuracy records and won various timekeeping competitions, particularly the precision timing trials held by the Kew Observatory near London. In 1892, Baume won the latter competition with a chronometer pocket-watch equipped with a tourbillon movement of which the precision was to remain unmatched for over ten years.

At the beginning of the 1920s, the company director William Baume joined forces with Paul Mercier. Together, they founded Baume & Mercier – Genève in 1918. The firm soon became one of the most active in the field of wristwatches by offering remarkably balanced special-shaped models. In 1919 the company was awarded the Poinçon de Genève, the highest distinction in watchmaking which testifies to the outstanding craftsmanship and quality of a piece.

Paul Mercier realised the importance for the brand to move with the times and keep pace with trends. The Roaring Twenties were about female emancipation, and Baume & Mercier was intent on fulfilling women's every desire.

In the 1940s, building on this profound understanding of femininity, Baume & Mercier launched one of its most successful models: the Marquise. This jewelry-watch nestling inside a bangle-style bracelet was both attractive and practical. Impelled by this creative momentum, the brand a number of exquisitely creative and amazingly modern ladies’ watches. It thereby proved that watches for women are not merely miniaturized and simplistic interpretations of masculine models. Femininity was already an integral part of the Baume & Mercier values – revealing a resolutely modern attitude.

Energized by the arrival of Paul Mercier, the company laid the foundation of a corporate philosophy that is still as timely as ever. From this point onwards, horological mastery was embodied through timeless elegance. A true trailblazer in this market segment, Baume & Mercier made a name for itself among a public eager for new products by launching the first "shaped" (meaning other than round) wristwatches.

During the entire Art Deco period, the brand asserted its style and left an enduring imprint on the field of watch design. Witness the Hampton collection, inspired by a rectangular watch launched in the 1940s. This chic, urban watch with its timeless design keeps step with the life’s many special moments by embodying an art of living instilled with inimitable elegance.

The company continued to seek balance in design, represented by the Greek letter Phi, symbolic of the Golden Ratio and also the Baume & Mercier logo since 1960. It laid the foundations for the archetypal traditional round watch. It thus launched various chronographs equipped with functions such as moon phases or triple date displays, as well as collection of round watches with a simple design and pared-down dials.

These emblematic Golden Fifties watches now enable the brand to return to its roots and gain inspiration from the past in creating collections such as Capeland and Classima, as well as the new Clifton line.

During the 1970s, Baume & Mercier offered innovatively shaped timepieces such as the Galaxie or Stardust models. Perfectly mirroring the brand’s inherent creativity, these models won prestigious international distinctions such as the Golden Rose of Baden-Baden. In 1973, Baume & Mercier anticipated societal changes by presenting the Riviera, one of the world’s first steel sports watches.

In 1998, the firm joined the Richemont group and enriched its collection with a number of successful models such as the Hampton and Linea watches, which immediately established themselves as the brand’s flagship lines. Baume & Mercier currently offers five collection designed to offer the best possible representation of quality watchmaking: Hampton, for shaped watches intended for both men and women; Capeland, for chronographs and Worldtimer watches; Classima for those with a penchant for minimalist design; Linea for elegant and dynamic women; and finally, the new Clifton collection matching the expectations of urbanites looking for a classic yet contemporary timepiece, contemporary in spirit but traditional in its design. 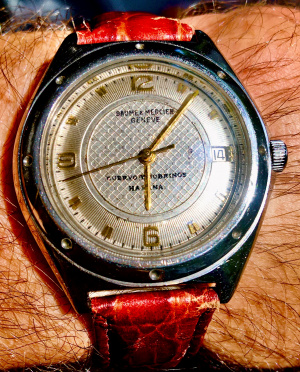