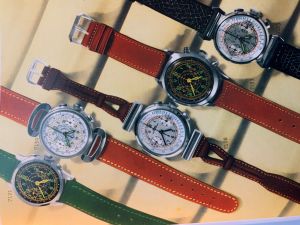 The subject of watch straps and bracelets is just as broad as the watches themselves. So often overlooked since the moment of manufacture, there is now such great interest in obtaining the original ones that an entire sub-market has developed. The correct bracelet can add thousands of dollars to the value of an Omega Speedmaster or a Rolex Submariner, whilst corfam straps made in the 1970s are now highly desirable pieces to complete the authentic look of a Heuer Monaco or other rally-racer.

References to Bonklips, Bunds, Jubilees, NATOs and Oysters must seem confusing to the uninitiated. It often very difficult to establish the correct item for an individual watch and this is where the close study of original brochures and adverts can prove invaluable. We hope that contributors will share their knowledge and allow this site to grow and become an important resource for collectors, present and future.

A Brief History of Watch Straps and Bracelets 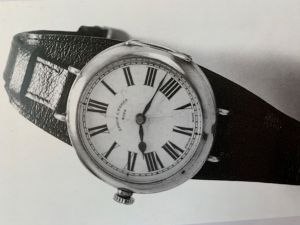 The first watches as such were worn on chains and stored in a pocket on a waistcoat or jacket. The concept of it being on a wrist was for many years the preserve of females. It was the advent of war of course, as well as motorised vehicles and powered flight that made the ability to read time quickly - direct from the wrist was more appealing (and masculine), as well as practical and useful. Form followed function and various strap and bracelet options soon became available, along with the re-design of cases to include lugs for the securing of the time piece.

In 1873 Patek Philippe sold a wristwatch with a gold bracelet. In 1880 Girard Perregaux made a series of wristwatches for the German Navy. And in 1904 the Santos is made by Cartier for aviator Alberto Santos-Dumont - suddenly a watch for the wrist was acceptable in polite society.

It was the very action of the movement of the wrist that led to the next watch development - John Harwood and his automatic winding movement of 1922. And the move (literal and figurative) from pocket to arm was complete, or leg in the case of those early aviators. WIth the exception of pocket watches for the gentry hunters, or railroad employees, the watch was now very firmly on the wrist.

Getting the right strap or bracelet for your watch

Of course the easiest way to ensure the watch and accompanying wristwear are correct is to buy a new one, or a New Old Stock one (NOS) or an original unworn example. A relatively easy prospect for something made in the last 10 years or so, but what about older models? So often the strap or bracelet had little value and was discarded as soon as it became worn, dirty, frayed or broken. It would be tossed away, or thrown into a watchmakers drawer, to resurface years later with a now much higher value and sold back, possibly to the original owner!

Sending the watch back to the original manufacturer may work with those who have a long history and large back catalogue of parts. Sometimes Omega or Rolex might have a link, or a buckle or a whole bracelet, but it is unlikely they would have retained straps from 30+ years ago, and many of the parts may now have been remanufactured with slightly different references or materials.

This leaves various options for the resourceful who insist on completion and authenticity. The collector can scour the online auction sites, dealers websites and specialist watch forums in the hope of finding the 'unicorn' bracelet or strap they need. For those with deep pockets, they might buy another example, just for one part. To meet this pent-up demand, a whole support network has grown up remanufacturing parts such as bracelets, crowns, bezels, hands and all the other parts needed to keep these wonderful old watches 'on the wrist'.

Original straps are by their very nature much less likely to survive years on a wrist, even when unworn. Leather dries, becomes brittle, cracks and disintegrates. Corfam and other materials such as vinyl and plastic all have their own short'life' and decay into uselessness.