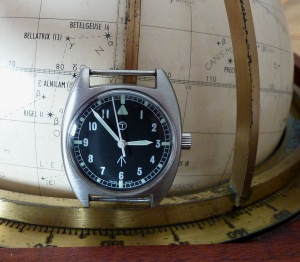 The 1976 MOD issued Sterile 6BB watch is somewhat of a mystery to collectors of modern British military watches. It’s cousins, the Hamilton and CWC tonneau-shaped W10 General Service watches are well-known and easily identified. See here for more information on these models:

The CWC G10 navigator was the logical next model and the quartz version replaced this 6BB version around 1980.

The movement in the sterile 6BB has been identified as being based on the A.Schilds AS 2160 17 jewel manual wind, 28,800 bph, but with a micrometer type of adjuster replacing the normal regulator. The micro adjuster appears to be very similar to that used on the Valjoux 7750 movement. It also has a hacking mechanism rarely seen in the AS movement and thought to be specially made for this watch.