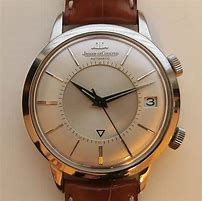 The Memovox was developed in 1949, following the development of wrist alarms by other manufacturers which since the first one in 1914 had been beset by problems. The first JLC Memovox was the manual wind cal 489 & was available to the public from 1951. Cal 489 was in production between 1950 & 1958. There are plenty of different case materials, dial furniture and sizes, but they all have the characteristic double crown arrangement. The bottom crown is a traditional winder and time setter. The top crown winds and sets the alarm time.

In 1951, Jaeger-LeCoultre's first alarm wristwatch was released - The Memovox. The company Vulcain had already produced the world's first alarm wristwatch named The Cricket in 1949. These first Memovox models were equipped with the watch calibres K489, K489/1 or K601, which were wound manually. (The K601 also a later quartz movement by Jaeger-LeCoultre)

The time and alarm function were separated by constructing two separate barrels which ensured that the power reserve of the clock was not reduced by triggering the alarm function. As a result, Memovox watches had two crowns for winding. Memovox watches were also sold with Logo on the dial and bridge engraving by Cartier, Gübelin (here under the name Ipsovox), Dunhill and Van Cleef & Arpels.

From 1955 on, Memovoxes were also available equipped with the caliber K814 which had a date display. Due to the Smoot-Hawley Tariff Act, the Memovox models for the American market were printed and engraved with LeCoultre instead of Jaeger-LeCoultre until 1980. The calibers for the American market were encased in the USA in watch cases that were locally produced. Accordingly, the dials and case shapes used in the US models differ from European ones. An exception were the case bottoms made of stainless steel, which were always engraved on the inside with LeCoultre on both European and US Memovox watches. The Memovoxes in North America were distributed by the company Vacheron-Constantin-LeCoultre, a subsidiary of Longines-Wittnauer.

In 1956 Jaeger-LeCoultre launched the K815 caliber, the world's first automatic alarm wristwatch, the Memovox Automatic. The automatic winding of this watch had a pendulum, which rotated in an angle of about 110 °, It was limited by two springs and stored the energy in the barrel for the time function - otherwise known as a bumper movement.

For the company's 125th anniversary, the Memovox Parking was sold in 1958, with the central alarm disc on the dial printed with markings to set the parking time. At the same time the Memovox World Time was offered, with the time zones printed on the dial - it could therefore be used to calculate the time in other time zones.

In 1959, the Deep Sea Alarm Automatic (reference number E857), the world's first diver's watch with an alarm function was developed, containing the K815 caliber.[2] This watch had a non-rotatable bezel.

Automatic wristwatch with date for divers