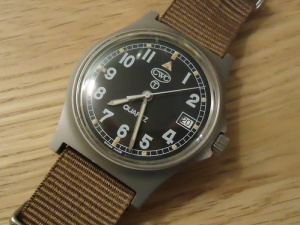 CWC quartz G10 Nav's with the date window were issued in both lume (6645-99-5417362) and non lume (6645-99-5417363) (for use on nuclear subs). The CWC Navigator is a well-built accurate and reliable watch, which used a new style of case shared with the first generation Quartz General Service Wrist Watches. It was first issued between 1980 and 1982 and could be used by all three services with production numbers approx 2000.