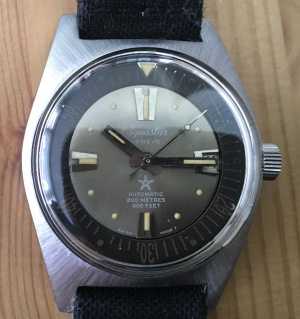 Also seen with Duward on dial. Large diver with internal rotating bezel - a first and notable development in diving watches. The Aquastar 63 case design, with its squared inner recess, became an icon and used on scores of watches. Polishing it or giving it a matte finish was easy. Consequently, this design is seen on everything from the Seiko 62MAS, the Bulova Sea Hunter, Wakmann’s, Girard Perregaux Olimpico, and so many more. 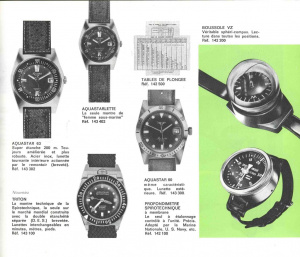 Coming in with a beautifully polished or bushed 37.5mm stainless steel case, the Aquastar 63 was a relatively large watch when it was released during the early to mid-1960’s. Comparing the Aquastars with similar watches from the time such as the original 35mm Zodiac Sea Wolf or the Bulova 666 diver, the 63’s are relative giants. Compared to something like a Submariner, they’re certainly smaller and thinner despite a listed water resistance of 200M. What the watch loses in pure mass, though, it makes up with its truly long, somewhat blocky lug design that houses a 19mm lug width.

Aquastar claims to have invented the rotating inner diving bezel. While most would argue successfully that an external bezel is more leakproof, Aquastar was likely aiming to appeal to divers who had concerns about accidentally moving their bezels when knocking into things. Aside from the leaking issue, the novel part on this watch is that it’s A.Schild 1713 automatic can be hand wound with the non-screwdown crown in but doing so turns the bezel. Going back and forth with the crown creates a ratcheting effect and it’s certainly interesting. Essentially, if you wish to wind the watch to get it started, you simply need to set the bezel afterwards. When pulling the crown out to set the time, a gear disengages the crown stem from the bezel, and it is left stationary during adjustment.