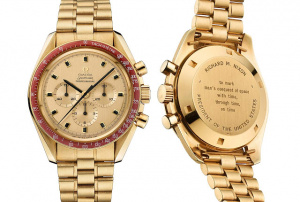 In tribute to the moon landing in 1969, Omega created the Speedmaster BA145.022. It appeared as a solid gold version of the standard Moonwatch but this was deceptive. This model was crafted from 18K yellow gold and included a rare burgundy bezel, as well as an inscription on the caseback that read, “to mark man’s conquest of space with time, through time, on time.”

This gold Speedmaster housed the calibre 861 and was Omega’s very first commemorative numbered edition, with only 1,014 models being produced from 1969 to 1973. The very first of these was created for US President, Richard Nixon, with number two allocated to the US Vice President Spiro Agnew. These watches, however, were later returned to Omega due to the US government’s strict gifting protocol. Model numbers 3 - 28 were given to the NASA astronauts. Watches 29 to 32 were offered to Swiss watch industry leaders and politicians, without any engraved number. The public were given the opportunity to purchase model numbers 33 - 1000.

Moreover, to commemorate the exceptional achievement, the case backs of the Speedmaster Professional were changed. The engraved Hippocampus was removed and the phrases “The first watch worn on the moon” and “Flight qualified by NASA for all manned space missions” were engraved. The arrangement of the text was then changed in 1971 to incorporate the Hippocampus on the back as well. This case back design is still being used today on the Speedmaster Professional watches.